Smalltown robot and would-be inventor Rodney Copperbottom (voiced by Ewan McGregor) heads for Robot City in the hope of showing off his latest creation to businessman Mr Big Weld (Mel Brooks). But all is not well when he gets there, and he finds himself fighting against the evil machinations of some corrupt robot bosses.

Robots in the Workplace

My Recollections of The Apollo 11 Moon Landing and Moon Walk

Perhaps the most watched television event of the twentieth century happened on Monday 21st July 1969 at 12:56 pm (Australian Time).

It was one of the few times in life when you clearly remember where you were at the time.

I was in our lounge room with Chris, who was my girlfriend at the time, along with other family members, and I well remember that day.

As the Lunar Module approached the surface of the moon, an estimated 650 million people watched Armstrong’s televised image and heard his voice describe the event.

We, along with the other 650 million people on earth, were holding our collective breath as Astronaut Neil Armstrong uttered those memorable words “The Eagle has landed!”.  I clearly recall the excitement and tension in our lounge room as we watched, our eyes glued to the small black-and-white television picture.

But the excitement and relief were echoed around the world as well.  The Mission Controller in Houston radioed back to Armstrong that there were “a bunch of guys there, about to turn blue”.  (Ten years later, on a guided tour of Houston in 1979, I had the pleasure of seeing that same control room).

Then just a few minutes later, we heard Armstrong’s words, transmitted from 384,000 kilometers away; “That’s one small step for a man… one giant leap for mankind”.

During those few minutes, the operators in the control centre in Houston Texas were attempting to capture and send out to the world, the clearest possible picture of Neil Armstrong’s descent down the ladder of the lunar module.  Neil Armstrong was waiting on the ladder for the go-ahead to step down into the fine dust on the lunar surface.  Astronaut Buzz Aldrin was waiting inside the lunar lander while Mike Collins was nervously listening and watching in the orbiting Command Module.

At the time, I was studying Communication Engineering at Melbourne’s RMIT and was particularly interested in the role Australia was playing in the relaying of the telemetry and television signals to Houston control.

Houston was having trouble capturing clear video of the event until eventually we heard the words “Switching video to Honeysuckle”.  The space monitoring station at Honeysuckle Creek in Australia had managed to receive a much better picture and this was then relayed to the watching world for the remainder of the broadcast.

The creators of this video stated that…

“Our goal is to capture a moment in history so that generations may now relive the events with this interactive educational resource. The world remembers the moon landing as a major historical event but often fails to recognize the scale of the mission. This interactive resource aims to educate visitors while engaging them with the excitement of manned-spaceflight to build a passion for scientific exploration”.

Australia’s Role in the Apollo 11 Mission

This 8 minute video from Honeysuckle Creek tracking station records the event from the perspective of the Australians involved in the Space Program at the time.

“Houston, we have a problem”

Forty years after the event, a television documentary was produced, called “One Small Step” – 2009.  You can watch this movie for a distinctly Australian perspective of this momentous event.  See how the communication link almost didn’t happen.  See the reactions of those involved when Neil Armstrong stepped onto the moon and of ordinary Australians actually watching, in real time “one of mankind’s biggest achievements”.

The 50th Anniversary of the Apollo 11 Moon Landing

The incredible event was celebrated this month on 21st 2019.

On July 16th 2019 at 0915 US Eastern Daylight Time, the Apollo 11 Astronaut Michael Collins returned to the historic launch pad (Pad39A) where Apollo 11 began its mission 50 years ago.

He spoke with with Kennedy Centre Director Bob Cabana.  The session was followed by a visit to the Launch Control Centre and Firing Room to meet up with Apollo era launch controllers.

The event was aired live on NASA Television and the agency’s website.

NASA celebrated the 50th anniversary of the historic Apollo 11 Moon mission and now looks to the future of exploration on the Moon and Mars with a live, two-hour television broadcast.

Robots of the future

Robots have been working in space now for many years but advancements in artificial intelligence mean that much more complex tasks can be performed in exploring other planets and their moons.  Robots of the future will be able to help establish a base on the moon and even assist with manned missions to Mars. 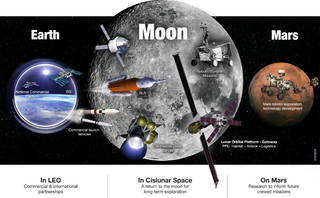